A sneak peek into the life of “Super Sherpa”

In 1988, Apa married Yangjin, then also a resident of Thame, with whom he has two sons — Tenjing and Pemba — and a daughter Dawa. The family moved to the United States with the help of his friend Jerry Mika for business opportunities and to provide better education for their children. They live in Draper, Utah.
In April 2009, Apa founded the Apa Sherpa Foundation, dedicated to the improvement of education and economic development in Nepal. 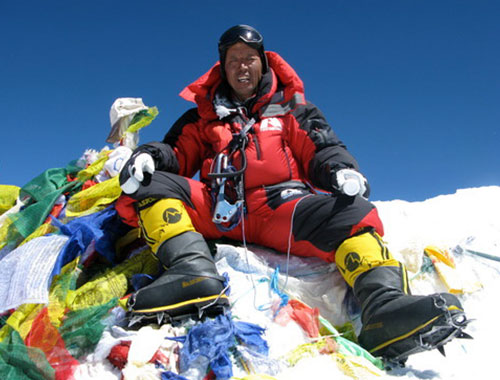 Lhakpa Tenzing Sherpa was born in Thame, a village in the Everest region of Nepal near the Chinese border. At the age of 3 months, he and his mother were caught in an avalanche and Lhakpa was thrown from the basket on his mother’s back and came to rest under an ice ledge. After his mother found him unhurt, she took him to the Lama to pray and give thanks. It was at this point where Lhakpa was renamed “Apa” which means much loved. Apa always wanted to be a doctor, but his dreams were shattered when at the age of 12 his father died. Following his father’s death, Apa had to take up the responsibilities of his family, consisting of his mother, two sisters, and three younger brothers. He dropped out of school and started working as a porter for mountaineering groups. His climbing career began in 1985, when he worked as a kitchen boy and porter for various groups but was not given the opportunity to reach the summit until 1990.

Apa first reached the summit of Mount Everest on his fourth attempt, on May 10, 1990, with a New Zealand team led by climber Rob Hall along with Peter Hillary, son of Sir Edmund Hillary. He then began his career as Sirdar, or chief Sherpa, for many high-altitude expeditions. He reached the summit every year between 1990 and 2011, bar 1996 and 2001. And in 1992, he reached the summit twice. In 1996, Apa was scheduled to climb with Rob Hall and his team, but Apa’s wife Yangjin convinced him to stay home to build their lodge. This turned out to be a fateful decision when sadly Rob Hall and his whole team perished in the climb.

Apa in his May 2010 trek says that climbing Everest has become tough due to the melting of ice and rock surfaces. He sees visible changes on Everest’s summit due to global warming.

Apa broke his own record by reaching the summit of Everest for the 19th time on May 21, 2009. He was a member of The Eco Everest Expedition, led by Bill Burke, whose purpose was to raise awareness about climate change. The team brought down five tons of mountain trash that included parts of a crashed helicopter, tin cans, and climbing material. On this expedition, a friend and fellow Sherpa, Lhakpa Nuru, was swept away in an avalanche on May 7, 2009.

Apa again broke his own record by reaching the summit of Everest for the 21st time on May 11, 2011.

On April 2012, he successfully led the first expedition to complete the Great Himalaya Trail, a 1,700-kilometer (1,050-mile) trek spanning the entire length of the Nepalese Himalayas. The Great Himalaya Trail is considered one of the world’s most difficult treks. Sherpa and three companions set off in January on the Climate Smart Celebrity Trek, an expedition promoting tourism and highlighting the effects of climate change. The adventurers set out from the shadow of the world’s third-highest peak, Mount Kanchenjunga, in the east and finished at Nepal’s border with Tibet in the west, 20 days ahead of schedule. Along the way they traversed some of the world’s most rugged landscapes, ascending beyond 6,000 meters (19,600 feet). Dawa Steven Sherpa, a member of the expedition who has climbed the Everest twice, said the group found mountain communities that rely on subsistence farming were suffering the effects of climate change.

Apa has climbed Mount Everest a total of 21 times, which stands as the current world record.